Christina Bird, 11 of Huntington Beach, and 12-year-old Jacob Victor Martinez, of Moreno Valley, were killed in an off-road hit-and-run crash in the San Bernardino County desert.

According to a report in The Press-Enterprise, the fatal crash occurred on the night of July 2. California Highway Patrol officials got a call from a bystander who found the two unconscious children on Stoddard Wells Road within the Stoddard Valley off-highway vehicle area. It is believed that the tragic crash was the result of a hit and run. END_OF_DOCUMENT_TOKEN_TO_BE_REPLACED

Two young boys drowned after an ATV accident the afternoon of April 12, 2015.

According to a news report in The Sacramento Bee, California Highway Patrol officials reported that the boys were identified as Blake Lee Cronkhite, 5, and Jayden James Secrest.

Officials said the boys were riding a END_OF_DOCUMENT_TOKEN_TO_BE_REPLACED

A 10-year-old boy from Rialto died in a Riverside ATV accident after he fell out of a moving ATV in Reche Canyon the evening of April 26, 2009, according to a news Web site. California Highway Patrol officials said the fatal personal injury accident was reported on Reche Canyon Road near Smiley Boulevard close to Moreno Valley. It is not known whether the boy, who has not yet been identified, was driving or a passenger in the Polaris ATV. It is also not known whether he was wearing safety gear.

My heart goes out to the family and friends of the young boy for their tragic and heartbreaking loss. I offer my deepest sympathies to everyone who knew and loved this child. Please keep them in your prayers.

Hundreds of young people, especially children 16 years or younger are catastrophically injured or killed in ATV accidents each year. According to a recent study done by the Children’s Hospital of Ohio, more than 136,000 people nationwide go to emergency rooms each year as a result of ATV accident related injuries. One-third of these crashes usually involve children who are 16 years old or younger.
END_OF_DOCUMENT_TOKEN_TO_BE_REPLACED

An 11-year-old boy was killed in an ATV rollover crash in an unincorporated area of Alameda County the afternoon of April 13, 2009, according to a KTVU News report. The boy, who has not been identified, was riding an all-terrain vehicle on a dirt road on private property at 27309 Fairview Ave. north of Hayward when the rollover accident occurred. Officials say the 11-year-old was driving the vehicle down a hill when he lost control and the vehicle began to roll over.

The boy may have been partially ejected from the vehicle as it tumbled down the hill, California Highway Patrol officials said. He was taken to an area hospital where he died. CHP officials are also inspecting the ATV to check if any mechanical problems could have caused this tragic ATV crash. The news report does not specify the brand or model of all-terrain vehicle the boy was driving.

My heart goes out to the family of this 11-year-old boy for their tragic and heartbreaking loss. I offer my deepest sympathies to everyone who knew and loved this young boy. Please keep them in your prayers.
END_OF_DOCUMENT_TOKEN_TO_BE_REPLACED

Christian Don Stover, a 16-year-old boy from Alpine, died in a San Diego ATV accident on the Barona Indian Reservation just south of Ramona, according to a news report in the San Diego Union-Tribune. Christian and some of his friends were driving the off-road vehicles the evening of April 1, 2009 near Wildcat Canyon Road and Featherstone Canyon Road when he lost control and was ejected. Christian Don Stover was pronounced dead at the scene.

My heart goes out to the family and friends of young Christian Don Stover for their tragic and heartbreaking loss. I offer my deepest sympathies to everyone who knew and loved this young man. Please keep them in your prayers.

Hundreds of young people, especially children 16 years or younger are catastrophically injured or killed in ATV accidents each year. According to a recent study done by the Children’s Hospital of Ohio, more than 136,000 people nationwide go to emergency rooms each year as a result of ATV accident related injuries. One-third of these crashes usually involve children who are 16 years old or younger.
END_OF_DOCUMENT_TOKEN_TO_BE_REPLACED

A teenager who was killed in a Fresno ATV accident on December 6, 2008 has been identified as 16-year-old Alyssa Wiley. According to this news report in the Fresno Bee, the off-road vehicle accident occurred in the 13000 block of Bullard Avenue near Academy Avenue.
California Highway Patrol officials apparently have no other information about this ATV crash. Alyssa died of her injuries a day after the accident.

My heart goes out to Alyssa’s family for their tragic loss. To lose someone so young must be heartbreaking for any family. Please keep them in your prayers.

There are many unanswered questions that arise from the tragic accident. What type of all-terrain vehicle was Alyssa riding? Was she a driver or a passenger? Was she wearing safety gear, specifically a helmet? How did she lose control of the ATV, if she was the one driving it? Answers to these questions will help determine what exactly went wrong or caused this ATV crash.
END_OF_DOCUMENT_TOKEN_TO_BE_REPLACED

An Upland man who died in a San Bernardino all-terrain vehicle accident on November 29, 2008 has been identified as 28-year-old Victor V. Ortiz. According to this news Web site, Ortiz was on an off-road quad vehicle (or ATV) when it overturned on Soggy Dry Lake, about three miles north of Highway 247 in Lucerne Valley. Ortiz, who was not wearing a helmet, was ejected from the ATV. Ortiz was transported to an Apple Valley hospital where he was pronounced dead.

I offer my heartfelt condolences to the family of young Victor Ortiz who was killed in this 11/29/08 ATV rollover crash.

Recently, I heard from Kim Smith, the mother of a young man who suffered severe brain injuries in an all-terrain vehicle (ATV) accident three years ago. Kim kindly agreed to share her story through our blog as a way of warning parents and teens, especially, not to take ATVs for granted. B.J. Smith’s story is an example of how “one fun ride” can change your life forever.

On a sunny afternoon while vacationing at his uncle’s house in Texas, B.J. decided to take his uncle’s new ATV for a spin although he and his cousins had been told never to go near the 350 c.c., 386-pound machine unsupervised. B.J. reached nearly 60 mph on the ATV when a dog ran out unexpectedly and clipped the front wheel of the ATV. He was thrown 25 feet from the point of impact. B.J. had no helmet on and slammed his head on the sidewalk with full force. Blood poured from his nose, eyes, ears and mouth. He was taken to Memorial Hermann Hospital “dead on arrival” after having celebrated his 15th birthday only six weeks before this nightmarish incident.

B.J. spent the first three weeks after the accident in a coma. His parents were told that the boy had only a 10 percent chance of survival. He spent five months in the hospital having suffered a severe traumatic brain injury, broken collar bone and ribs, punctured lung, lacerated liver and injuries to his arms, legs and back. The 6-foot, 225-pound boy, who was an avid athlete and a gym rat, was now relearning to walk, talk, eat, bathe and dress. He had very little memory of life before the accident. His parents were told right away that B.J would need 24/7 care for the rest of his life. Kim Smith says she recalled the words of Michael Paul Mason who best described the aftermath of a traumatic brain injury; it “strikes with the concussive ferocity of a bomb; woe to those near its epicenter”. B. J. Smith and his family lived through such a catastrophe. 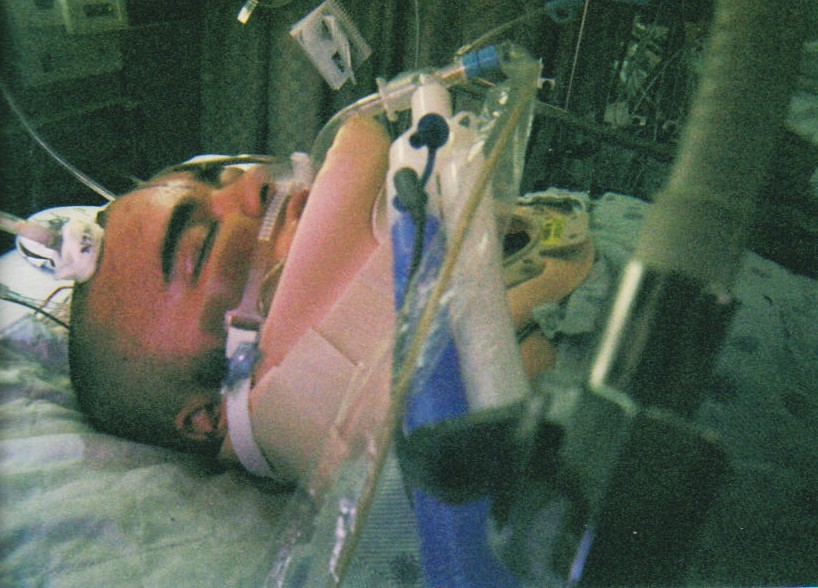 B.J.’s personality changed dramatically. There were days when he was docile and gentle, giving hugs and showing a need for affection. But on most days, he had emotional outbursts and crying tantrums, cursing wildly and sometimes turning physically violent. Nothing could have prepared his family for such grief and heartbreak. Doctors recommended that family members tell the teen stories from his childhood to offer comfort and remind him of his beautiful life prior to the ATV accident.
END_OF_DOCUMENT_TOKEN_TO_BE_REPLACED

Markus V. Whitherspoon, 20, suffered severe injuries after he was ejected from a 2004 Yamaha Prohauler ATV in Valley Lake Ranchos on Oct. 17, 2008, The Madera Tribune reports. The ATV was being driven by a 17-year-old boy and was registered to Greg Weeks of Madera.

California Highway Patrol officials said several ATVs were being driven to a local store or restaurant when the 10/17/08 accident occurred near Road 30 and Avenue 20 ½. Whitherspoon was taken to an area hospital with major internal head injuries. Racing all-terrain vehicles, dirt bikes and quads is apparently a popular sport in the Valley Lake Ranchos area.
END_OF_DOCUMENT_TOKEN_TO_BE_REPLACED

Joaquin Monreal, 26, of Santa Maria, reportedly died in a California ATV accident at the Oceano Dunes recreation area. According to this news report, Monreal went missing after a late-night right on his all-terrain vehicle. Friends, who went out looking for him, found Monreal unconscious, lying in the sand next to his ATV. He was reportedly pronounced dead at the scene.

Officials, who are investigating the accident, say they don’t know how the ATV accident occurred and don’t have any eyewitnesses. They also say Monreal was wearing proper safety gear and the weather was not a factor in the crash. Park rangers say Monreal must’ve died waiting for help. Rangers recommend ATV riders to go out in groups of at least three so one person can stay with the injured person and administer aid while the other goes out to get help. This is reportedly the fourth fatal ATV accident in the area this year. There were three in 2007.

It’s too early to tell what caused the death. The investigation is complicated by the fact that there were no witnesses who saw it happen and Monreal was equipped with safety gear and doesn’t seem to have been intoxicated, although the coroner is still conducting an autopsy and toxicology tests to determine the cause of death.
END_OF_DOCUMENT_TOKEN_TO_BE_REPLACED