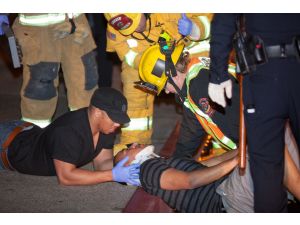 Two men were hit and injured near Fullerton by a suspected drunk driver early morning on February 9, 2013. According to a news report in The Orange County Register, Rosenne Garnica, 24, was driving east on Santa Fe Avenue near Heroes Bar and Grill when she hit two men standing outside a car talking to people inside it. Police say both men were thrown by the impact and lost consciousness. They were transported to an area hospital for treatment of facial, leg and head injuries, but are expected to survive. Police estimate Garnica was traveling at about 20 mph at the time of the collision. She was arrested on suspicion of felony DUI.

There were three fatalities and 57 injuries involving DUI crashes in Fullerton, according to California Highway Patrol’s 2010 Statewide Integrated Traffic Records System (SWITRS). During the same year, 45 people died and 1,317 were injured due to alcohol-related collision in Orange County as a whole.
Based on this news report, it appears that the driver was under the influence when she struck the two men seriously injuring them. According to California Vehicle Code Section 23152 (a): “It is unlawful for any person who is under the influence of any alcoholic beverage or drug, or under the combined influence of any alcoholic beverage and drug, to drive a vehicle.” Under the same section, it is illegal for drivers to operate with a blood alcohol content (BAC) of 0.08 percent or higher.
Compensation for DUI Victims
Injured DUI victims, as in this case, suffer serious injuries that may require hospitalization or continued treatment. In any case where negligence or wrongdoing is involved, injured victims can file a personal injury claim against the at-fault party seeking compensation for damages including medical expenses, lost wages, cost of hospitalization, rehabilitation, permanent injuries, pain and suffering and emotional distress.
In addition to facing criminal charges, DUI drivers can also be held financially liable for the injuries and damages they cause. An experienced Orange County personal injury attorney who has experience financially pursuing drunk drivers will be able to help injured victims and their families obtain just compensation for their significant losses and hold the at-fault driver accountable.
Source: http://www.ocregister.com/news/police-495332-woman-chlebowski.html photo source: Kevin Warn, OC Register